Interesting Tactics is an architecture collaborative established in 2018. Active participants include Mary Dahlman Begley, Isaac Hase, Drew Smith, and Austin Watanabe. This is a selection of 3 projects, all created in Minneapolis 2019-2020; accompanying text produced by MDB in May 2020.

I.T. is trained in architecture, landscape architecture, and urban planning. We began within these disciplinary training grounds, and formed as a study group in 2018. We developed outside of the institution as a group of spatial practitioners, designers of things and also designers of not-things.

We recently described ourselves as such: Interesting Tactics is a utopic spatial practice based in the American Midwest. They believe that Utopia is not a place or a goal - but a process, the process of UTOPING. IT’s work is variously collaborative, self-initiated, and commissioned, primarily situated in the upper Midwest United States. 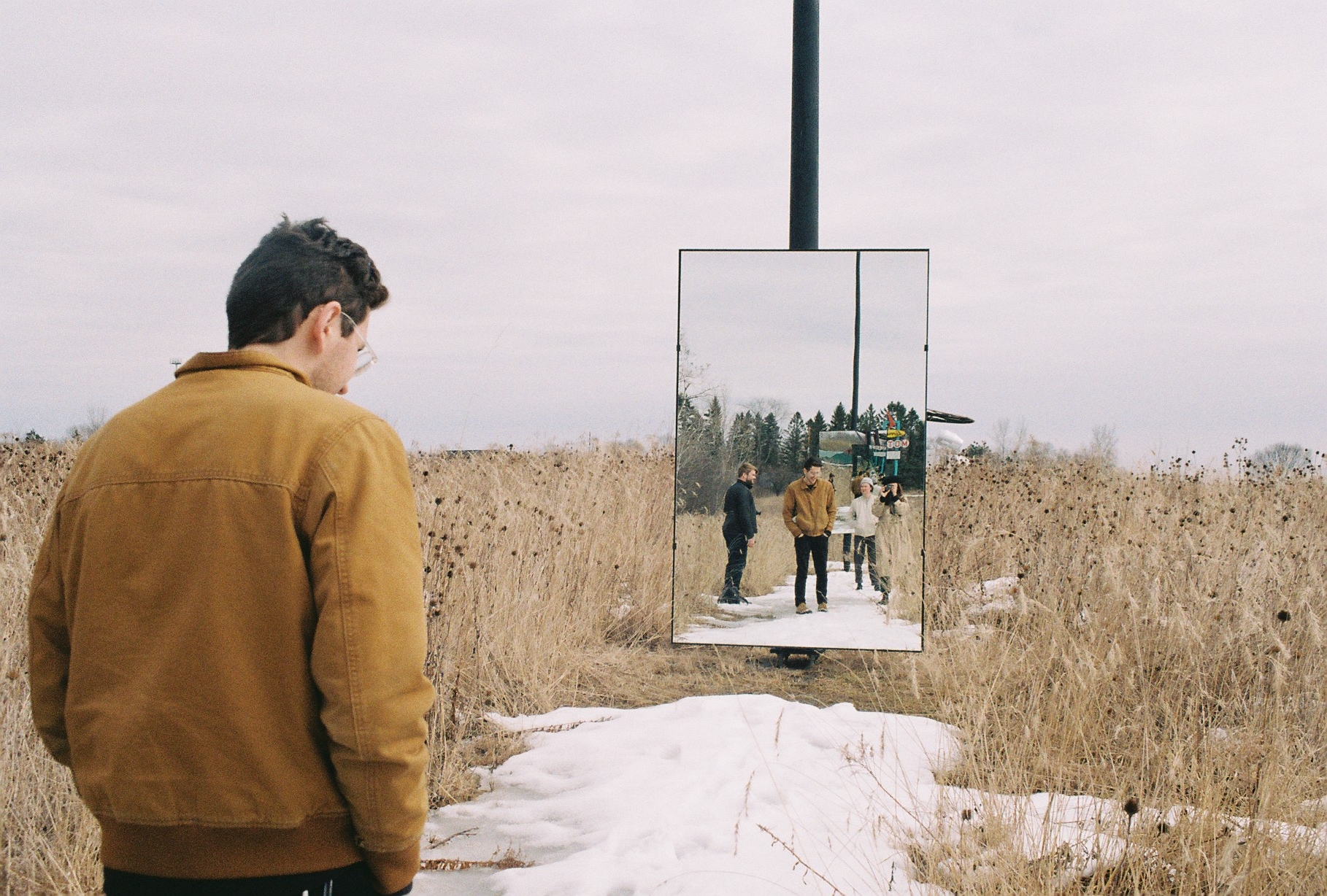 Our current project, begun last summer and continuing with the new growing season, is Triangle Park. Located down the hill from my house, which is across the street from IT member Austin’s house, there is a small triangular median. We applied for a neighborhood grant to fund the design of something on the triangle. We were intentionally vague in our initial proposal, and were delighted to find that homeowners in our neighborhood are also interested in utopia.

The project began with research into the history of the triangle. This included a bit of archival research, turning up aerial photographs and historic neighborhood plats, and a bit of gossiping with the neighbors. The triangle’s caretaking had changed hands multiple times over the years due to disagreements about gardening style between neighbors and members of the garden club. Gathering up and piecing together the history was a preview of the varying passionate points of view about the triangle. 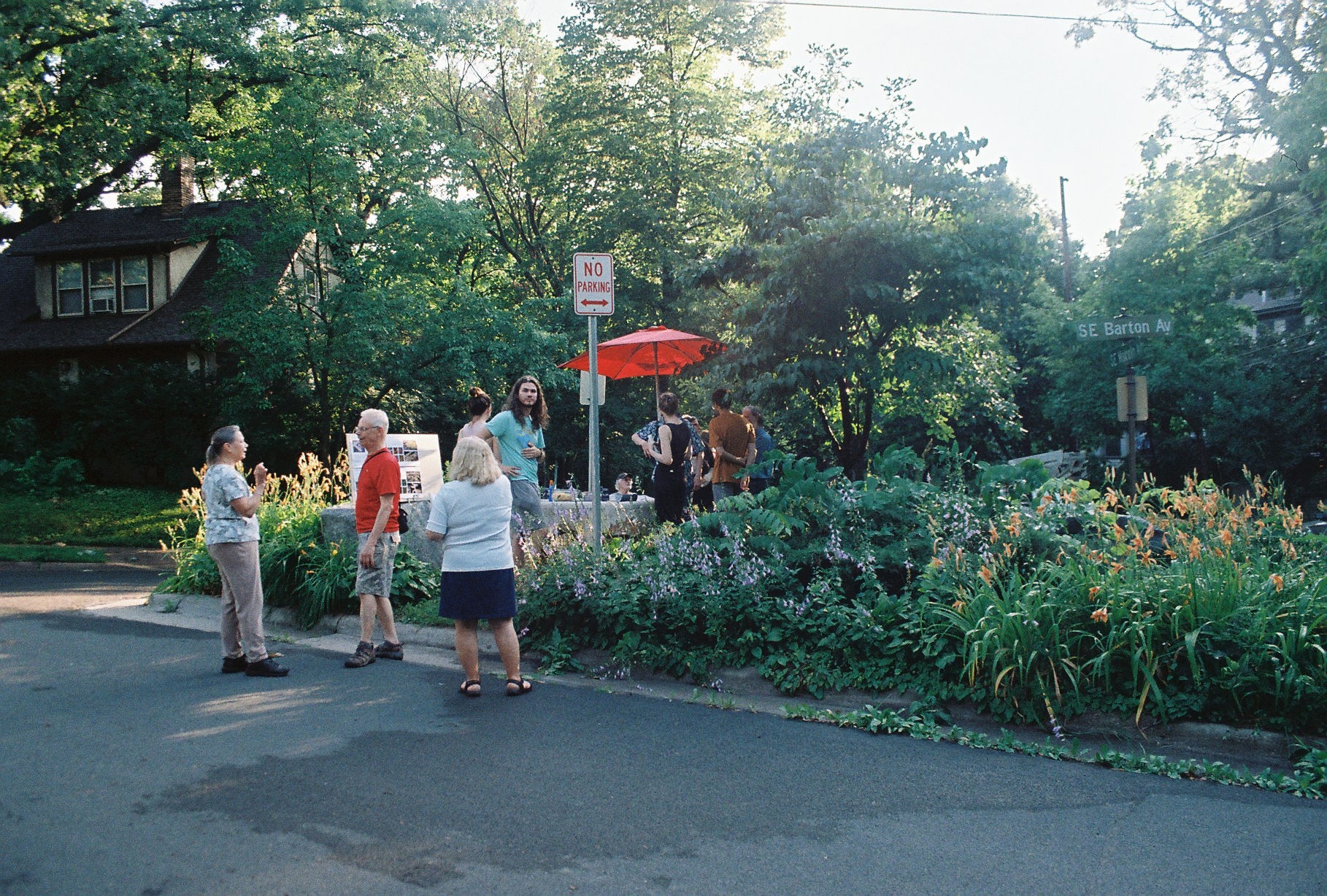 In the fall, we removed several half-dead juniper bushes to make way for a small clearing, and eventually a bench. While using an ax to chop at the small trunk of these pine-y bushes, I thought about the neighborhood history grown within the bush. Someone had good intentions in planting this bush, but it did not fare well in the sun. The triangle was a sort of neighborhood laboratory, and our iteration is only the latest. Our work could not exist outside of this record of social practice, just as utopia that attempts to elide reality fails.

Work on the triangle continues summer 2020, as the ground thaws and we begin stretching our legs after a long cold winter.

Construction and the creation of a gathering space have new implications. Thus far, our design has changed by planting a lot more colorful flowers. These flowers - both exotic and native to the Midwest - will grow throughout the summer and fall, a time release firework display on the median in the road. I will watch from my balcony, and we will tend to the plants

A developing idea in the work of Interesting Tactics is the role of maintenance. We read and think about a ritual of maintenance that elevates the cared-for object into a manifestation of something real and true. As earnest, as humble, as utopic as it may be, we are thinking against a teleology, and towards a sort of utopic gardening. The gardener is the one who tends, loves, waters, adds, removes, plants, prunes, and works with and against the earth.

This idea, of centering a practice on the ritual of care, emerged through a series of projects (collected here for presentation and reflection). In winter 2020, I.T. participated in an annual festival called Art Shanty Projects. The festival makes use of the frozen lakes in the upper midwest as an ephemeral, public, unregulated space. The building typology is informed by ice shanties, the small huts that ice fishers set up for their long stake outs on the ice. Each shanty at the festival is created by different group of artists. I.T.’s art shanty is called Flora Sauna (for Solar Fauna). Inspired by deep winter greenhouses, we attempted to build a passive solar greenhouse that would be heated by the sun. We planned to grow coniferous plants, and plant seeds for native plants, in hope that the heat from the sun would trick seedlings to bloom into a false, early spring

On the lake, it was bitter cold. The ice is around a foot thick for most of the month, and despite the cold the crowds totaled in the thousands. We quickly learned that the weak Minnesota sun provided less heat than the warmth of bodies huddled together. Our shanty quickly became known as the Sauna for Plants (but people and dogs allowed too).

During the design of the Flora Sauna, we carefully considered program. What would people do inside? How would they know when to leave? Our design was calibrated to allow for flexibility and a purposeful lack of programming. We shut the visitors inside and they did not know what to do next. The intent was to allow for happy misuse, such as when a group of friends unexpectedly met inside the shanty, or a mother nursed her baby inside the warm respite on the ice. There is a giddy, uncomfortable silence that settles in on a group of strangers when they are shut inside a greenhouse. Our design was in attempt to not only see if we could do it, to build a passive solar greenhouse, but to test the limits of our ability to care for living things, by testing the most extreme environment, on the edge of habitability.

The Flora Sauna was blissful in its unexpected calmness, an oasis in a busy weekend festival. The plants, however, suffered from the constant stream of visitors letting in cold air. We were not able to grow anything beyond pine trees and crocus bulbs in the shanty, but the burst of green, so unexpected on a barren, frozen lake, was a gesture of utoping, a tactical paradise on the frozen lake.

Growing things in unexpected places was the initial impulse that led to I.T.’s interest in rituals. The Microsurface project, pictured above, was a prototype project for bringing plants into unexpected places.

Superstudio’s Supersur-face has similarities to a chairscape in its total-izing, alienating conti-nuity. A favorable politic is present: the Cartesian grid represents an ordered and supposed rational dis-tribution of resources. In representation, this environment is ethereal and evocative. Supersurface is a “box of polar-ized mirror glass with a grid in the floor through which tubes project, bringing air, food, water, and commu-nications to the occu-pants, who can also watch a film on TV that describes the design-er’s vision of the world and see pic-tures of clouds pro-jecting on the ceiling.”

A grim reality, Superstudio did not succeed in the destruction of objects. In their own words, Supersurface was “the definitive product.”

Microsurface is belonging for the Other, the nonhuman, by creating a place to be for the previously unwelcome. Microsurface is a sitscape, an interface removed from a whole. Microsurface has agency and grants agency - to those who wish to engage and to those who do not wish to engage. Rather than totalizing, Microsurface is tactical - offering a mobile acceptance of the current hardscape and potential future for the xeno. Blades of grass pushing up, reaching toward the light, mushrooms popping out of the sole, seeking opposed conditions from their chlorophyllic neighbors, different yet coexisting. Microsurface could be, perhaps, the utopic chair, or a process toward it anyway; Microsurface offers a chance at belonging, inviting the outside in.

This collection of projects traces the trajectory of I.T. for the past two years. The future of the practice is - by happenstance and by design - emergent. Our projects have grown in scale over time. We’ve collaborated with many people, and considered expanding the collective. Pandemic put our summer plans on hold, but the plants in Triangle Park are starting to come up. I moved the seedlings outside, putting them in their new home on the median. This gesture feels a bit like I am kicking baby birds out of the next, and they are left to find a way of making do on their own - their own tactics for utoping.